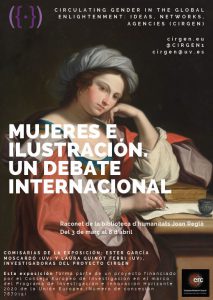 In the eighteenth century the foundations of contemporary debate on gender difference were set: what it consisted of and what its implications (intellectual, sentimental, social) had for private and public life. Within the framework of the Enlightenment, this was a lively debate, stimulated by the circulation of ideas, texts and people, which generated a global awareness but with territorial particularities. However, much remains to be learned about the international and transatlantic circulation of these debates. With the intention of contributing to this field of research, our project CIRGEN seeks to exceed the limits that national logics often impose on historical research, and to introduce a Hispanic perspective in general historiographical discussion of the Enlightenment, often distorted from a strictly French and Anglophone view. Specifically, CIRGEN emphasizes the circulation of gender identities in the fields of translation, sociability, travel, reading and the culture of sensibility stressing the agency of women and men in their individual and collective experiences.

On the occasion of International Women’s Day on March 8, we have made a selection of books that gives visibility to a long-running debate, which acquired a global dimension especially from the Enlightenment, and which is still alive in both society and historiographical production.

With the collaboration of staff at the Humanities Library “Joan Reglà”. Exhibition “RACONET”