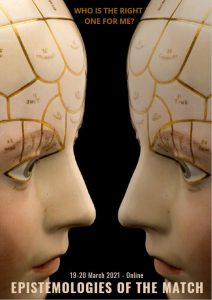 “It’s a match!”
According to The Guardian’s 2015 estimates, the phones and inboxes of over ninety-one million persons have buzzed with these or similar words – the opening salvos of courtship in the world of online dating. Available in 196 countries, Tinder now boasts users as far as North Korea – a state where, in contrast, Facebook remains banned. Chinese-market apps such as Momo, aggressively emulating Tinder’s success, reported in 2020 over 100 million active accounts.

The recent prominence of matching may at first appear a result of specific contemporary stakes. We live in an age when the dangers of personal isolation are of increasingly prominent mainstream concern. Never mind the pandemic and its regime of social distancing: in 2017, the U.S. Surgeon General had already warned of an “epidemic of loneliness”; in 2018, citing the “one of the great public health challenges of our time,” the British government created its first Minister of Loneliness.

Yet, as the essays in this workshop show, promises of scientific and technological means for finding a match have a much more protracted legacy in the history of science. Renaissance astrologers pored over birth horoscopes to determine the fitness of marriage partners, while antebellum phrenologists consulted as matchmakers. Enlightenment natural philosophers examined the nervous system to explain amorous attraction, while utopian socialists proposed centralized bureaus of information to allot ideal partners to each member of society.

The underlying motivations in all these cases were diverse. Although the figure of loneliness did at times surface, the quest for the perfect match was just as well a matter of the interests of elite families in assuring the moral and physical qualities of marriage partners; the assertion of equality between the sexes; the expression of reformist middling-class sensibilities; the call for social justice vis-à-vis a laissez-faire sexual marketplace. What remained constant throughout these shifting concerns was the hope, however elusive, that a more certain and systematic array of concepts, tools, and practices borrowed from the sciences would allow one to better know who each individual was, and therefore which individuals should come together. It is these epistemologies of the match which our essays aim to explore. Taken as an applied science of personhood, matching can be seen as a fundamental yet curiously neglected part of the tale of the human sciences. Its history suggests that to re-interrogate how claims to scientifically know an other have shaped gender, sexuality, and emotions, we might start from a beguilingly simple query: who is the right one for me?

Participation in this seminar is by invitation only.