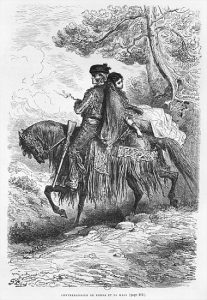 Spanish Contrabandista of Ronda and his Maja, engraved by Felix Jean Gauchard (1825-72) (engraving) (b/w photo) by Dore, Gustave (1832-83) (after); Bibliotheque Nationale, Paris, France; out of copyright

(Due to preventing measures related to COVID-19, the conference will be finally held online).

In 18th and 19th centuries, the South of Europe was frequently imagined as a land of passion and violence, bigotry and servility. Southern Europe was an “internal other” in which Western modernity projected its fears and desires. This Otherness was declined specially through gender categories that insisted on the inadequacy of the Mediterranean peoples towards the normative models of the European modernity. This conference will explore how all these categories crossed their ways, and their influence on the nation-building projects and the construction of sexual differences in the Mediterranean countries.